AFTER THE TEMBISA SHUTDOWN: GO HOME OR BUILD ORGANS OF WORKING CLASS POWER?

THE TEMBISA SHUTDOWN, following the Nguni meaning of the township’s name, was promising. It was sparked by the community’s rebellious response to the crisis faced by working class people in South Africa and the world especially in the post-Covid socioeconomic situation. Skyrocketing cost of living in the middle of unprecedented levels of unemployment, poverty and inequality. Working class lives where everything is a problem: water, sanitation, waste removal, electricity, housing, healthcare, transport, etc. For 48 hours beginning on the first day of August, the township, on the East Rand of Gauteng and governed by the City of Ekurhuleni Metropolitan Municipality, erupted into flames with most roads barricaded with stones, burning tyres and uprooted street and traffic lights. No one could go to work and local businesses could not operate; it was total shutdown. 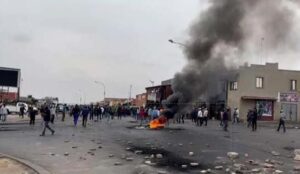 For 48 hours beginning on the first day of August, the township, on the East Rand of Gauteng and governed by the City of Ekurhuleni Metropolitan Municipality, erupted into flames with most roads barricaded with stones, burning tyres and uprooted street and traffic lights.

The civic centre at Rabasotho Section, one of twenty municipal “customer service centres” was burnt down, together with several municipal vehicles. An electricity sub-station was damaged leaving the township in darkness. Victory for Tembisa Community Forum In some sections of Tembisa there was sporadic looting but, despite Operation Dudula having launched in June 2022 in the area, there were no xenophobic attacks. The Tembisa Community Forum, a relatively new structure, won the contestation for leadership of the shutdown from the Economic Freedom Fighters (EFF), Dudula and the ANC. It compiled and presented a set of demands to Mayor Tania Campbell of the Democratic Alliance-led (DA) multiparty coalition that runs the municipality. Her mistake was her failure to accede to the residents’ demand to meet with her and instead send five members of her mayoral committee. The packed Rabasotho community hall shouted down the mayor’s representatives, collapsed the meeting and resolved to shut down Tembisa. One of the main demands was the restoration of the 100 kWh units of free basic electricity that every resident enjoyed. The multiparty council had passed a budget on 25th May which reduced this to 50 units, including limiting beneficiaries to registered indigents. The same budget increased electricity and water tariffs, pegging them higher than most municipalities.

The municipality’s austerity budget was partly a response to National Treasury instructions to reduce its expenditure and, it must be said, also in line with the DA’s approach to these matters. All the multiparty coalition government parties voted for the budget including the “noncoalition” EFF, whose municipal leader stated that “we do not welcome the budget; however, we do accept and support it”. The response to the shutdown was a combination of reform and repression. The mayor, her mayoral committee and multiparty politicians denounced it as “criminal”, with some suggesting that a “third force” was in operation. Four people died in the melee with two allegedly shot by officers of the Ekurhuleni Metropolitan Police Department. The ANC provincial minister of local government, Lebogang Maile, addressing Tembisa residents during the crisis, emphasised that a “white” officer had shot dead one of the protesters and how unacceptable this was. He did not mention that the ANC government policy of turning municipalities into commercialised entities that prioritise cost recovery and collection of payments from “‘customers” might be partly to blame for the crisis in Tembisa and other municipalities.

After the shutdown, Tembisa residents seem to have something to smile about. In a meeting with residents, the mayor acceded to many of their demands including to reinstate free basic electricity although reduced to 50 units, reconnect the traffic lights, scrap half the historical debt owed by residents, delink sanitation, water and electricity bills, increase the assessment rates rebates threshold, etc. This partial victory will probably consolidate the Tembisa Community Forum’s leadership of the community and affirm the importance and power of mass action in the struggle for a better life. It will also give the DA-led multiparty council some breathing space, helping it to keep the ANC, still sore from losing the municipality, at bay for a while. It might even help the EFF to continue taking no responsibility for its collaboration in decisions that take away free services from the working class. The civic centre at Rabasotho Section, one of twenty municipal “customer service centres” was burnt down, together with several municipal vehicles

Don’t go back home After the mayor relented and conceded the residents’ demands, everyone went back home. In Sri Lanka, a massive uprising toppled the president from power. Afterwards, the prime minister, an ally of the president, was allowed to take power. and the masses went back home. In Egypt, the masses toppled the dictator, and they too went home. Is it possible that the time has come for the masses not to stage uprisings and then go back home? Perhaps the time has come for the masses to follow the example of the storming of the Winter Palace during the Russian Revolution. Instead of going home, the workers in Russia went to their soviets, their worker councils, and began the process of building an alternative power, a workers’ government. Tembisa also means “potential”. The time may have come to realise the potential that lies in mass action, the power of the working class to build a different world. To build local and national organs of working-class power. For us, that was the lesson and promise of the Tembisa shutdown.

Trevor Ngwane is a chairperson of the United Front in Johannesburg and a member of the Socialist Group. Moeketsi Monaheng is an Ivory Park/Tembisa organiser and community leader.