The MPLA is a party that has an inherent disdain for democratic ideals and personal freedoms. The government retained absolute control of mass media and nationalised all the remaining independent television channels and most of the existing press.

IT WAS AUGUST 18TH, SIX DAYS before the election. Incumbent President João Lourenço was delivering a speech to a rather apathetic public in Benguela province, southwestern Angola. In it he described the country’s unaligned civil society as “lumpens and thieves”.

Such open, contemptuous disdain for citizens who don’t believe in his political party or in him as President had become a hallmark of his increasingly desperate campaign rallies. Lourenço’s party, the MPLA, has been in power since Angola gained independence from Portugal in 1975. They were well aware that they were deeply unpopular among the country’s urban population, especially the youth, and that these would be the most contested elections they would face in history. And they proved to be so. MPLA narrowly won with 51% of the vote, while Unita, their erstwhile battlefield opponent turned political foe, gained 44%. The MPLA heavily lost the capital Luanda, its traditional homeland, where one-quarter of Angola’s population lives. They also lost Cabinda and Zaire provinces, where crude oil, its main export, is extracted.

The majority of Angola’s current population has no recollection of the brutal, 27-year civil war, which only ended in 2002 after the death of Unita’s leader, Jonas Savimbi. The median age in Angola is currently 16.7 years. Almost 65% are 25 or younger. Millions of them voted for the first time in these elections.

\MPLA was the victor of the civil war. It is a Marxist-Leninist liberation party that quickly lost its ideology and its conviction after the fall of the Berlin Wall. It rules Angola as a de-facto one-party state that tolerates democracy only when it poses no direct threat to its hold on power. The party maintains strict control over state institutions and absolute control over state media. It intoxicates the population with propaganda that equates protesting with an act of war and voting for the opposition with a threat to stability.

The end of the civil war coincided with the vertiginous rise of global oil prices, by far Angola’s most important export, and the country’s GDP grew along with it. From 2002 to 2015, Angola’s exports rose to nearly $600 billion. Hundreds of millions of dollars were spent on low-quality infrastructure projects, but unfortunately, billions of dollars disappeared from public coffers.

Angola was and remains one of the most corrupt countries on the continent and in the world, and well-connected party members and businessmen became overnight millionaires. Such largesse did not go unnoticed to Angola’s burgeoning young population. When the oil boom ended in 2014, MPLA’s already waning popularity began to plummet. Angola was ruled by José Eduardo dos Santos from 1979 to 2017; he is directly responsible for the architecture and structure of the country’s famously opaque patronage and corruption system By the end of his tenure he had begun to place his sons and daughters as heads of key state enterprises. These included Sonangol, the national oil company and one of Africa’s largest state corporations, and the Sovereign Wealth Fund. The ex-president had become so unpopular that his comrades decided it would be best to not put him on the ballot in 2017. They did however give him the option to choose his own successor. He chose João Lourenço.

Sworn in in September 2017, João Lourenço set about dismantling his predecessor’s economic empire and patronage system. He removed his sons from positions of power. Most of them fled into exile after being accused of serious corruption crimes. One was even put on trial; his appeal is currently pending. Former ministers were also put on trial. Lourenço was roundly supported for these actions, and his popularity surged. However, it quickly became clear that he had set up his own patronage system. The judicial system appeared to be biased and continued to be politically controlled. And members of his own cabinet were credibly accused of corruption with no consequences whatsoever.

Working-class and poor Angolans continued to see no improvement in their lives. In fact, Lourenço’s rule coincided with a deterioration of living standards. The effects of plummeting oil prices, including IMF-imposed austerity, new taxes, fewer jobs and rising inflation, were keenly felt. Seeing people of all ages digging through public trash containers became a common sight in Angola’s largest cities. When João Lourenço became president, he promised to improve freedom of speech and freedom of the press. His first months in office were indeed marked by more openness. But it didn’t take long for old habits to return. The MPLA is a party that has an inherent disdain for democratic ideals and personal freedoms. The government retained absolute control of mass media and nationalised all the remaining independent television channels and most of the existing press. Competent, independent newspapers in Angola can be counted on the fingers of one hand. Protests started to become violent again and personal freedoms were greatly curtailed, and the president reneged on his promise to institute local elections.

As this was happening, the opposition took concrete steps to present a united front. Unita’s new, charismatic leader, Adalberto Costa Júnior, quickly figured out that he had to have youth support in order to galvanise his political project. He also realised that he’d have more success if he allied himself with the most popular Angolan politicians outside his party. Thus was born Frente Patriótica Unida (United Patriotic Front), a loose alliance of popular opposition parties spearheaded by Unita.

During the election campaign, it quickly became apparent that the MPLA’s rampant corruption and difficulties in improving the lives of the country’s citizens had taken their toll on a mostly young, urban population. Their campaign events were stilted and awkward, characterised by apathy and indifference. Attendees, mostly party members and public servants were coerced to attend and bussed in from neighbourhoods and provinces far and wide.

Unita’s rallies, by contrast, were much more boisterous; attendance was voluntary and crowd sizes and diversity reflected this. While Lourenço listed a litany of supposed accomplishments that weren’t felt by his audience, Adalberto Costa Júnior talked about constitutional reform, human rights, respect for democracy and finally implementing local elections. While one invoked fear and insults, the other offered hope and opportunity.

A democracy only in name 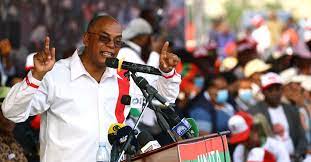 Unita’s new, charismatic leader, Adalberto Costa Júnior, quickly figured out that he had to have youth support in order to galvanise his political project.

Angola is a democracy in name only, and our electoral system confirms this. Like South Africa, Angola doesn’t have direct presidential elections; voters select a political party to lead the country, and the head of that party’s list of delegates is automatically declared the President. All 220 names on each party’s list are chosen solely by the party. A voter has no say in who their delegates are. We simply put a mark on a ballot paper next to the face of the leading candidate and the flag of their political party. This can hardly be called representative politics.

Angola has held five multi-party elections in its history. In every one, Unita has rightly contested the results, for the elections have never been truly free and fair. MPLA’s total control of the state and constant violations of constitutional and electoral laws mean that it can act with impunity. And it does exactly that. Besides control of the Natural Electoral Commission (CNE), it also controls the Constitutional Court, which doubles as the Electoral Court during elections.

Unita again contested the latest election results until the very end, saying that their parallel vote count differed from the official CNE count. A civil society group, Movimento Cívico Mudei, also conducted its own parallel count and showed similar results. Civil society was much more engaged in these elections than in previous ones. They decided to “protect” their vote by making sure each polling station posted voting summaries on their door, as required by law. This spooked numerous biased poll workers. They saw by how much MPLA was losing, and violated the law, deciding not to post voting summaries, or only posting them after considerable public pressure.

CNE refused to release their voting summaries for comparison with Unita’s, and the court refused to compel them to do so. Once again, ordinary Angolans viewed the process as flawed and their growing distrust of public institutions continues unabated. Perhaps the greatest indicator of purposeful voter disenfranchisement in Angola is the official abstention rate. 14 million Angolans were registered to vote. These included 2 million deceased voters. 55% decided not to even make their way to the polling stations. They stayed home. Of those that did vote, only about 30% actually voted for the MPLA. Such is the crisis of legitimacy facing the ruling party, and the level of apathy, distrust and loss of confidence in the Angolan political process.

The average Angolan does not believe in their own public institutions, and they do not believe that their lives can be improved through the ballot box. It’s becoming increasingly harder to convince them otherwise.

Cláudio Silva is a political analyst and entrepreneur. He was born in Angola and educated in the US. He moved back to Luanda in 2013. He works in the hospitality sector.