THE 13TH OF JUNE 2022 marked 42 years since the brutal assassination of Walter Rodney, the Guyanese activist and historian. His most influential book, How Europe Underdeveloped Africa, has been described as “a priceless weapon of theory and history that restores the dignity of African people”. He calls for social solidarity as a counter to the rise of capitalist individualism without social responsibility. Institutionalised xenophobia runs counter to any form of social solidarity. It divides us by promoting narrow national chauvinistic arguments to appease workers and the most marginalised, in the hope of winning votes.

The economic and social crisis taking place in South Africa must be located in our history of colonisation and apartheid. It is a major factor in fuelling the xenophobic violence that is targeting predominantly black African brothers and sisters fleeing to South Africa. The abject poverty that large sections of our society continue to live under makes for fertile ground for othering and scapegoating of foreign nationals.

Politicians spread lies
Common sense tells us that violence against foreign nationals will not address the deep-rooted crisis of poverty and inequality that is the face of South Africa. Yet, politicians spread lies, blaming foreign nationals for this economic crisis. In blaming migrants, political parties effectively shift the attention of citizens of this country away from focusing on the economic crisis which has resulted in systemic unemployment. Unemployment that is a consequence of neoliberal economic policies of privatisation of public goods, and outsourcing.

Ultimately it is because of the failure of the ruling party to transform our society. Apartheid resulted in a deeply divided unequal society, along race, class and gender lines. Yet race and gender domination remain largely undisturbed since 1994. South Africans, and in particular the South African Government and political parties, have shown contempt for their fellow human beings. This contempt is located in the dehumanisation of black bodies going back to slavery, where black bodies were bought and sold as private property! We cannot solve this problem by holding hands and singing Kumbaya through acts of social
cohesion.

Poverty and violence
The divisions and hatred that are being spread predominantly by political parties like Action SA are part of the capitalist exploitative system. Violence against migrants takes place as a direct consequence of a national economic crisis. This violence can be directly attributed to statements made by politicians and institutionalised forms of xenophobia. And it is taking place in the context of gender based violence –in the last three months, out of the 6,859 people killed in the country, 902 were women and 352 were children. 232 of the overall murders were as a result of domestic violence. The dehumanising conditions of poverty are resulting in increasing levels of “collective violence”. Institutionalised forms of Xenophobia, especially from law enforcement agents and the Department of Home Affairs, indicate the desperation of political parties. They are losing power as an increasing number of South Africans are not voting. The Zondo Commission has documented the link between a parliamentary seat and access to the looting machine. So the stakes are high in the battle to win votes.

With the ANC in power, we have lived through economic crisis, cutbacks in social spending and an unchanged landscape of inequality. Political parties and our democracy are failing in their mandate to transform South Africa, a constitutional obligation to create a society that respects the human rights and dignity of all who live in our country.

This is where “scapegoating” comes in. Patronage politics and corruption loom large as poverty, systemic unemployment and impoverished living conditions are the order of the day.

Who are the migrants?

Are South Africans aware that many of the so-called “economic migrants”, refugees and asylum seekers come to South Africa because we are allegedly champions of human rights protection? That it is the most vulnerable people who leave their home country – vulnerable because of poverty or conflict or sexual orientation? That they face death if they do not move from their homes? Displacement is also increasingly taking place as a direct consequence of the climate crisis. Starvation and death from the climate crisis are disproportionally affecting sub-Saharan Africa. People are suffering extreme heat events, increasing aridity and changes in rainfall.

The KZN floods, one of South Africa’s deadliest disasters of this century, are also being attributed to the climate crisis. One metre of sea-level rise by the end of this century is predicted under a 40 C warming scenario. Together with malnutrition, communicable poverty-related diseases like TB and HIV make for a major humanitarian, manmade catastrophe. 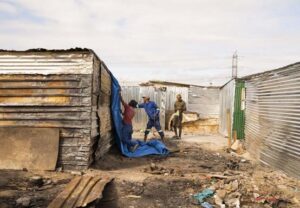 Joe Slovo informal settlement. The abject poverty that large sections of our society continue to live under makes for fertile ground for othering and scapegoating of foreign nationals.

Kopanang Africa Against Xenophobia is a campaign that aims to build solidarity through action. We work with formal and “informal” workers and people who are unemployed. Our fight is against poverty and not foreign nationals. And to fight poverty and inequality we have to fight for social justice. Corruption, crime and violence against women and the LGBTQI+ community are injustices.

Poverty and systemic unemployment are located in our past, as a tiny minority benefited, based on the colour of their skin. Unfair privilege has enabled a small section of the population to accumulate wealth, which benefits families from one generation to the next. The majority of black African people are trapped in a cycle of unemployment and poverty.

This government should start by implementing a wealth tax, and a basic income grant. The ills of apartheid cannot be blamed on migrants. The government has to have a clear plan to reallocate resources to progressively realise the constitutional rights of all who live in South Africa. We should be uniting as the workers and poor in this country to hold our government to account in producing this plan and showing us the money. This is how we can address poverty and systemic unemployment and ensure that we transform South Africa. Not by violently attacking the most vulnerable amongst us.

Sharon Ekambaram is a human rights activist. She is current head of the Refugee and Migrant Rights Programme at Lawyers for Human Rights and a member of Kopanang Africa Against Xenophobia.