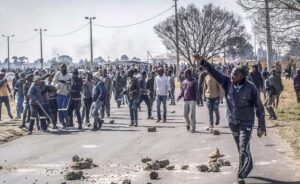 Kagiso residents hunting zama-zamas. Kagiso, Tembisa and the rioting in many parts of the country indicate how South Africa is on the brink; the ticking cluster bomb is prefaced by mini explosions.

THE GANG RAPE OF EIGHT WOMEN in Kagiso is an outrage. It is even more of an outrage when you consider this is not an isolated incident. So many women are raped, and gang raped in South Africa. It is estimated that a woman is raped every 26 seconds. Adding insult to injury, we have to listen to the crassness of the Minister of Police. He should be overseeing the safety of all women from rape and all people from violence. Instead, he says one of the women was lucky she was raped by only one perpetrator. This man like many in Ramaphosa’s government is completely out of touch with the realities of this country.

Kagiso and Tembisa
The gang rape set off a pogrom of mindless rioting and violence against anyone suspected of being an illegal immigrant and a so-called zama-zama. The Kagiso riots and vigilante violence occurred less than a few days after Tembisa was engulfed in angry riots, this time related to the police response to a community-organised shutdown of the township. The shutdown was called to protest electricity cut-offs.

Kagiso, Tembisa and the rioting in many parts of the country indicate how South Africa is on the brink; the ticking cluster bomb is prefaced by mini explosions.

These are symptoms of the crisis we face in South Africa. They force us to focus not only on what is happening but on what lies behind the extreme violence tearing our country apart.

Nearly half the working population is unemployed. According to the World Bank, our unemployment rate is by far the highest in the world. Not only the most unequal country. Also the most unemployed. So it is not difficult to understand the collapse of the social fabric.

Crime, gangsterism and substance abuse flourish in these conditions. Throw into the mix the absence of essential services, through the collapse of local government, and desperation is the result.

Life becomes brutal and people are brutalised. Fear and anger pervade. In this vortex, it does not take much for scapegoating and “othering” to be internalised and grip consciousness. Social cohesion and solidarity collapse.

Violence against women
Why these conditions give rise to the pandemic of violence and sexual abuse against women needs greater and more concrete analysis. Nevertheless, it is worth pointing out what we do understand. Patriarchy – the oppression and subordination of women – is rooted in capitalism’s dependency on women’s unpaid labour. That combines with the subordinate role of women in traditional society.

Then there is mass unemployment, the shift to precarious forms of labour and the re-engineering of cheap labour based on super-exploitation. These contribute to the breakdown in the traditional role of men. We can also talk of a crisis of masculinity: a loss of the sense of power, which is then recovered through violence, in the family and in the neighbourhood.

Alienation and inequality
We also have to factor in capitalism as a system that breeds alienation. Workers have no relation to the products they produce. Yet the products – the car, the cell phone, the Nike trainers – are given iconic status. They are craved well beyond their function.

And these glittering products of neoliberal capitalism are unattainable. The result – is alienation and anger, particularly for the youth; any sense of a future of ambition is constantly crushed.

South African capitalism creates an extreme form of inequality. It racialises, separates, divides and polarises. There is a huge gap in income between the rich and the poor. It is captured by a statistic not sufficiently quoted: 10 per cent of the richest people in the country own 90 per cent of the wealth. This inequality breeds a system of neo-Apartheid: the wealthy the middle class live in their own enclaves clueless of how the vast majority live.

The tiny elite go to exclusive schools, places of worship, nightclubs, restaurants, art galleries and sports clubs. They own the media. So their lifestyles shape the content of radio and television broadcasting. Their cultural practices are normalised. They dominate and further exacerbate a sense of alienation amongst the black working classes.

Economic crisis
This social crisis helps us to see that South Africa stands on the brink of catastrophe. But it is the economic crisis, and its mismanagement by a government out of touch with the people, which gives a sense of inevitability.

The social crisis is rooted in the massive disinvestment by big capital from the productive sectors of the economy and from South Africa altogether. Take the case of Anglo American. At its height, it owned 60% of the value on the JSE. Now it’s less than 5%. The same is true for other mining, steel, chemical, food, retail and financial corporations which built their conglomerates under Apartheid. Under conditions of globalisation, free trade and capital flows, they reinvented themselves as global companies, playing in global markets. They did not abandon South Africa entirely; their South African operations just
became a bit player in a larger pool.

The wealthy middle class live in their own enclaves clueless of how the vast majority live.

There are many reasons for the disinvestment by big business. Concern for the security of their investment is a big factor. They see BEE ownership targets as a risk. And BEE is a risk in a secondary sense. Drives toward the blackening of the economy come with pressures for inducements, backhanders, corruption and “‘state capture”.

It’s not that “monopoly capital” is squeaky clean. We only have to consider all the cases of price collusion brought before the Competition Commission. But “state capture” is about creating vehicles for black business to gain control of the heights of the economy through control over the state. This threatens big business’ need for the stability and predictability that comes from governance through rule of law, as opposed to arbitrary rule.

Big business sees the erosion of strategic state-owned industries, such as Eskom and Transnet. It experiences the dysfunctionality of local government and its increasing inability to provide vital inputs and services. This is a major disincentive to investing in the economy. Hence, the drive for the privatisation of electricity and the ports and rail sectors.

The presidency of Ramaphosa has shifted the balance of power away from what has been termed the “predatory elite”, the wannabe black capitalists. It has shifted towards the monopoly capitalists, the neoliberals in the state and the creditors as well as their agencies – Moody’s and Standard and Poor for example. The government is resolute in cutting the budget, in privatising and in protecting the investment of foreign capital, through interest rate hikes and other measures to contain inflation.

Resistance
It is these measures, to address the immediate concerns and interests of big capital, that bring the class struggle between capital and labour back into play. Austerity is a great threat to poor and working-class people – especially the attack on public sector wages, and private sector competition for Eskom, Transnet, etc Job losses and tariff increases will result, as vital services are subjected to the motive of profit maximisation.

Unfortunately, the prospects look grim. The SACP just completed its congress without mapping an independent class struggle agenda. They confirmed their support for the Ramaphosa-Gondogwana-Gordhan pro-big business faction of the ANC against the Radical Economic Transformation grouping, centred around Ace Magashule and the KZN region. Cosatu will most likely follow suit.

Numsa is a potentially powerful force to drive Saftu and influence radicalising affiliates of Cosatu, such as Num and Nehawu in a class struggle direction. But it has been misled. Its leadership is on a path of self-destruction, incapable of looking beyond purging those who don’t toe their line. “My enemy’s enemy is my friend” and “if you are not with us you are against us” are the bases of its sectarian “politics”.

In the vacuum, Saftu is taking up the struggle. Through the convening of the Working Class Summit, it is proposing a programme of shutdowns and general strikes. All progressive forces must rally to this cause. It is the only sliver of light in the dark reality we face. The working-class movement is organisationally very weak. A campaign which encompasses the demands for decent work, a living wage, free basic services, land, and a basic income grant can unite and mobilise both the organised and the unorganised.

Organise, organise and organise must be the line of march of all those who can see the great threats posed to South Africa’s fragile nation.