The struggles of working-class women Many women quit their jobs and choose unemployment because of sexual harassment in the workplace.

ALL WORKING-CLASS communities suffer from the capitalist crises of climate change, unemployment, poverty, and inequality. But women suffer the most. As capitalism advances, it also benefits patriarchy and helps it to flourish. As such, patriarchal capitalism imposes its domination of women wherever they may find themselves, whether in social, political, or workspaces.

We find hegemonic masculinity in our organisations (especially in our trade union movements). We find it in political and social spaces where there are egotistic male leaders. Not least, we find it in the economy.

Austerity and Unemployment
Officially, 34.5 % of the South African population is unemployed, although this figure is misleading – the figure for the “expanded” definition of unemployment is more accurate because it includes what are called “discouraged work-seekers”. This shows the true figure for unemployment is 46.5%.

Almost 40 % of those unemployed are women, according to the official figures. This shocking percentage, however, would be more if you included homemakers and discouraged job seekers. The majority of them are women and would take any job if they were presented with one. This crisis of unemployment for women can be attributed to the flourishing of patriarchy under
capitalism. It puts men in positions of power and also leads them to use their power to ask for sex before granting women a job. Many women quit their jobs and choose unemployment because of sexual harassment in the workplace.

Women and unemployment
Under patriarchal capitalism, women perform duties that make this system of capitalism function through unrecognised and unpaid work in the household. This country’s energy crisis impedes women’s ability to fulfil their role in household production.

The South African economy does not produce jobs. Instead, we see greater levels of retrenchments adding to already skyrocketing levels of unemployment. Women are most impacted by unemployment – they also suffer the consequences of unemployment, poverty, and inequality imposed on their husbands. In this sense, women are doubly oppressed by the economic crises afflicting South Africa. Hegemonic masculinity drives men by creating in them a need to get respect and command submission in relationships when they are breadwinners for the home. Having a job and being able to provide is how hegemonic masculinity induces men to measure themselves as “real men.” When men fail to live up to this standard, they become fragile and project their shame and embarrassment on their partners through physical abuse.

Domestic violence and gender-based violence have proliferated during the coronavirus pandemic and subsequent lockdowns. The South African economy was forced to shed a high volume of jobs. When working class women leave their relationships, often due to violence, they face the brunt of the economic conditions created by the pandemic. They must rely on a social wage which is below the poverty line. At the same time food prices are skyrocketing, and this is why we see greater levels of hunger, malnutrition and stunting amongst women and children.

The case of Community Health Workers
When women do find wo k in this economy it is casualised and precarious, requiring them to be more submissive toward their employer. A good example of this is community health workers (CHWs). 95% percent of CHWs are women. They have operated on three-month contract terms since 1991, and that continues today.

Also, these frontline women health workers remain precarious and pray every three months that their contracts will be renewed. When they protested for permanent employment in the Eastern Cape department of health and various regional offices of the department of health in 2020, they were told the government has no money to employ them permanently.

It is also the hegemonic masculinity of egoistic men who threaten that they will not renew their contracts because they participated in these strikes. This is what women are subjected to in this current order of patriarchal capitalistic society.

Climate change and women
The Eastern Cape has been hit by greater levels of drought since 2005. Friends in the Nelson Mandela Bay Water Crisis 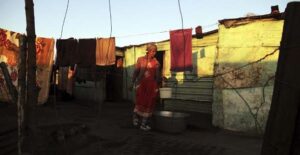 Under patriarchal capitalism, women perform duties that make this system of capitalism function through unrecognised and unpaid work in the household.

Committee often write about the inept bungling by the government. This has exacerbated the situation into a serious Day Zero in Nelson Mandela Bay. With the municipality’s taps emitting a poor quality of water, we see many working class women in long clinic and public hospital queues because they have fallen ill themselves or they are standing with their sick children. These women sometimes stand until the early hours of the morning because their children have been forced to drink this dirty water from their taps. The women who cannot afford sanitary pads and use cloths struggle during their menstruation cycle. When there is no water they cannot wash their cloths. Again, it is hegemonic masculinity created by capitalist patriarchy that puts the careers of politicians and the profits of service providers over the well-being of people.

It is at every turn and in every crisis that we see it is women who face the gravest consequences. It flourishes in this environment of hegemonic masculinity which subjugates women to its various expressions of violence, personal, individual, and systemic in nature.

Women’s experiences in working-class movements
The most annoying thing for me, as a woman who participates in politics, is the talk about women as people who need to be empowered. This expresses hegemonic masculinity by treating women as objects. You often hear them when addressing issues of women, using words such as “our women’’; as if they own women as their objects.

These are masculinities that do not look at women as comrades who can contribute to the cause as equal to men. Rather they look at women as sexual objects to use in eliminating opposition within the organisation. Women are promised positions by men in power on the condition they retrieve information from political opponents by sexually enticing them. Men ask for sex in promise for a position. They often make unwanted advances, touch and hug women inappropriately. It is the same with the masculinities in leadership positions. They do not believe in democratic debate. If things do not go their way debate-wise, they find other means and are even spiteful, to get what they want. These are the conditions we also find in our organisations of the working class.

These are the conditions in which women find themselves in this society. This is the case in progressive spaces that are supposed to be a refuge, as well as other social spaces. We really do need a feminist society that takes women’s interests into account when faced by economic, social, and ecological crises, because women suffer the most from their effects.