TUNISIA: THE ROAD TO AUTOCRACY Tunis January 14 2011. The demands were undoubtedly economic and social: to bring down the corrupt and deeply unjust political-economic system.

DURING THE WINTER OF 2010-2011, the Tunisian people rekindled a flame that was thought to have been extinguished forever – that of a popular revolution against corrupt and dictatorial regimes. The shock wave spread in the region (Egypt, Libya, Algeria, Syria, Yemen, Sudan, Lebanon…). And it continues to spread throughout the world (Chile, Ecuador, Bolivia, Sri Lanka). It expresses a tremendous will, in the countries of the South, to overthrow the established order and to establish sovereign and democratic regimes.

Of course, such processes are slow and perilous, and many people are currently paying with their blood for the price of emancipation and basic rights. Up to now, Tunisia has managed to get away without extreme violence, but it is currently living in difficult times. The future is unclear. But before addressing the tumultuous news from Tunisia, it is worth recalling some facts that make it possible to understand the state of mind of the people when they mobilised at the end of 2010.

From colonisation to oligarchs

From 1881 to 1956, Tunisia experienced an extractivist colonisation that profoundly transformed the social and economic structures of the country, orienting production systems towards satisfying the French market. This has created a significant regional imbalance between the interior and the south of the country, on the one hand, and the north-east, on the other.

The republic, born after independence, was characterised by an authoritarian presidential regime. After a short developmentalist period driven by a sovereignist national project (19561969), the country aligned itself with the global trend towards liberalism. It practiced policies of integration into the world market. This aggravated regional imbalances and increased disparities and social inequalities.

Suffering from senility, H. Bourguiba ended up being overthrown in 1987 by his Minister of the Interior, Z.A. Ben Ali. Ali was a soldier who strengthened the dictatorial police regime and the power of the single party. He gave over the country’s economy to plunder by those close to him, while continuing to apply the injunctions of the International Financial Institutions (IFIs) and western powers.

Throughout this process, a rentier oligarchy gradually formed into an economic elite. A handful of families took advantage of the privileges they got from being close to political power and the support of capitalist countries. They monopolised positions which gave them income, including in banks, and they acted as intermediaries for foreign interests at the expense of the people.

On 17 December 2010, Mohamed Bouazizi, a landless farmer working as an informal vegetable seller, set himself on fire in front of the local administration of Sidi Bouzid, after a police officer confiscated his goods. Indignation quickly spread throughout the locality and to neighbouring regions, finally reaching Tunis on January 12, 2011. The slogan “get out!” resounded in front of the Ministry of the Interior, carried by a diverse mass of people, united by a deep desire for change. The demands were economic and social: to bring down the corrupt and deeply unjust political-economic system.

This episode, which ended with the dictator’s flight, led to chain reactions:

In the absence of a political force capable of carrying the popular demands, the old splits quickly re-emerged. They gave rise to an extreme polarisation between Islamists on the one hand and those who wanted to “modernise” the previous regime (Destouriens), on the other.

Meanwhile, they completely ignored social and economic issues. Drafted in this context, a new constitution emerged in 2014. It created a phony parliamentary political system, in which the balance of power was nullified by the predominance of the invisible f inancial power of the oligarchic caste. This configuration has plunged the country into extreme instability: 14 governments have come and gone since 2011, without ever questioning the economic model against which the people rebelled. In the meantime, the economic crisis has worsened. To stay in power, all these governments have just obediently applied the policies dictated by foreign donors, especially the IMF, the World Bank and the European Union. They have constantly pushed Tunisia more and more in the same direction: austerity, privatisation, guarantee of foreign investment, opening of the domestic market and indebtedness. Meanwhile, the two political poles in the race for power have done everything to undermine the transitional justice process.

Neither had an interest in destroying Ben Ali’s machine. Both wanted to preserve it to take it over. The electoral bases of the two poles were built with the same clientelist practices. This configuration of power has plagued political life and accentuated corruption and clientelism.

In 2019, the presidential elections saw an increase in the power of populism. Two candidates went to the second round: Nabil Karoui, a media tycoon and notoriously corrupt man, and Kais Saied, a near-unknown constitutional law teacher. Each in his own style, they both played the card of populism. Karoui distributed food aid; Saied promised young people horizontality, reconstruction from below and a fight against corruption. In a country that aspires to justice, it was K. Saied who won, with 72% of the vote, despite a record abstention rate since 2011 (43%).

Kais Saied in power, an autocracy that does not say its name

The first government approved by Saied lasted only 6 months and the second 11 months. Meanwhile, parliament had become the scene of a ludicrous comedy in which blows and insults were exchanged between the political caricatures of Islamists and Destourians. Of course, this provoked protest movements and on the evening of July 25, Independence Day, the president decided to put an end to the masquerade. In breach of the constitution, he declared a state of emergency, and announced the suspension of parliament and the dismissal of the government. 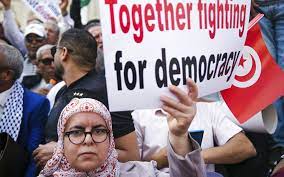 Protest against draft constitution in which the principles of separation, balance and reciprocal control of power are completely absent. All power is in the hands of one man, the president.

On the evening of 30th June, he published a draft constitution that has been divisive and provoked indignant reaction in civil society. A referendum is scheduled for July 25th 2022, with simple “yes” or “no” options. (Since this article was written, the new constitution was passed in a suspect referendum with a poor turnout, and the opposition “National Salvation Front” has decided to boycott the December parliamentary elections – ed). The general climate is that of a country in the grip of deep manipulation. The president used every means at his disposal – including public means – to get his constitution adopted. The journalists’ union, human rights organisations, feminist networks and opponents of the autocratic process have denounced heavyhanded attempts at muzzling them. They called for the constitution to be rejected – some proposed a boycott, others a clear “no”.

The main novelty – or rather regression – of the constitution is the establishment of a presidential regime in which the principles of separation, balance and reciprocal control of power are completely absent. All power is in the hands of one man, the president. Without going into detail, four points are enough to grasp the extent of the power grab:

And again this constitution brings the debate back, once again, to the polarisation of Islamists and modernists, while obscuring economic and social issues. Not much has changed.

Layla Riahi is a Tunisian researcher and activist. She is part of the Tunisian Platform of Alternatives as well as the Working Group on Food Sovereignty.