DURING THE WEEK of September 20th 2021, thousands of people in every province of South Africa mobilised under the banner of #UprootTheDMRE. They were protesting against the polluting, unjust and harmful energy and mining agenda of Minister Gwede Mantashe’s Department of Mineral Resources and Energy (DMRE). They demanded a more just energy and mining future. During the week of September 20th 2021, thousands of people in every province of South Africa mobilised under the banner of #UprootTheDMRE.

The mobilisation was conceived of and planned by the Climate Justice Coalition and partners, and was supported by dozens of civil society organisations. It was not just about climate change. It was about a more intersectional vision of climate, energy and mining justice, which brought together those who are being harmed by the DMRE’s agenda.

It was led by youth activists, unwilling to have their future condemned to deepening climate chaos by the DMRE’s polluting plans for lots of new coal and fossil gas, at a time when climate science makes clear we must move away from fossil fuels. Youth who are tired of job opportunities in green industrialisation foreclosed by those with vested interests in fossil fuels.

It was led by communities sick of being plunged into darkness through loadshedding. Communities which lack proper access to energy, because the DMRE refuses to unlock a renewable energy future which would be the fastest, most affordable and job-creating way to bring new energy online. Communities demanding a Green New Eskom that can provide clean, safe and affordable energy for all.

It was led by workers and communities demanding that we move to renewable energy through a rapid and just transition, that leaves no one behind and invests in their future, so they can be part of a lower-carbon economy. They were demanding one million climate jobs and more social ownership of renewable energy.

It was led by local communities in the Karoo who are saying no to water-intensive and polluting fracking for fossil gas.

It was led by fishing communities who are resisting the corruption scandal-ridden plans for polluting powerships, which could devastate their local fishing grounds and cost South Africa hundreds of billions of rands.

At a national level, the coalition collectively created a list of demands that were delivered to the offices of the DMRE across the country. The demands were summarised into the following five points:

Doubling down on extractivism

Months later, the DMRE offices are yet to respond. Their non-response is part of a broader trend in which the DMRE repeatedly ignores civil society and community voices while marching to the beat of polluting corporations. Instead, Minister Mantashe and his lawyers have threatened to sue the Secretary of the Coalition (the author of this piece) for an article detailing the reasons why the coalition was marching. In response, the coalition issued an open letter denouncing such intimidation tactics as part of the increasingly authoritarian, undemocratic and unjust energy agenda of Mantashe and the DMRE.

Just the week after the #UprootTheDMRE protests, the DMRE hosted a conference in Limpopo, announced to the public the night before. Community and civil society representatives were not invited; corporations and industry were. At the conference, the DMRE declared the attacks on coal “premature” and invited coal, oil and gas corporations to invest in South Africa.

Minister Mantashe for his part has spent the months since the mobilisations in strong defense of fossil fuels and against clean energy. In a perversion of anti-colonial discourse, he has tried to paint a defence of coal as an act of resistance against Western imperialism. A rather twisted perspective, given that he is defending one of the worst vestiges of apartheid: the coal-fired Minerals- Energy Complex (MEC), which has made South Africa one of the world’s most unequal and polluting countries.

The coalition was not naive in thinking that the mobilisation by itself would (re)move Mantashe, or uproot the DMRE or the MEC they vociferously defend. What it has done though is help build political power and grow the movement. It has helped expose how Mantashe’s DMRE is increasingly out of step with climate reality, economic reality, and even its own government.

That disconnect was perhaps most clearly demonstrated during COP26. There, the South African government signed on to a R130 billion climate finance agreement aimed at accelerating a just transition away from coal. Just a few days later, Mantashe decried the “global anti-fossil fuel agenda” and called on Africa to resist the supposedly imperialist clean energy agenda of the west – while wanting to sell Africa off to western fossil fuel corporations instead. 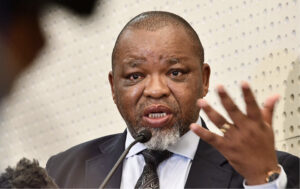 Mantashe decried the “global anti-fossil fuel agenda” and called on Africa to resist the supposedly imperial clean energy agenda of the west – while wanting to sell Africa off to western fossil fuel corporations instead.

To continue the struggle against Mantashe and the polluting DMRE, the coalition and its members are engaging in a range of related actions. We recognise that this struggle will require deep and sustained movement-building, deploying multiple tactics to ensure radical change.

On the legal front, the #CancelCoal litigation is taking the DMRE to court for its decision to procure 1500MW of expensive, unnecessary and polluting new coal power plants. As a new report from the University of Cape Town’s Energy Systems Research groups shows, those plants are unnecessary for energy security. They would cost at least R23 billion more than a least-cost optimal electricity plan and result in 25,000 job losses and lots of unnecessary pollution.

On the governance front, the coalition is working to undertake research on how to transform the DMRE’s governance away from being a defender of the MEC, to a force for a socially, economically and environmentally just energy and mining future. The aim is that, in early 2022, we will release that research as part of our efforts to help transform the department.

The coalition will also be escalating actions targeting the DMRE and Minister Mantashe. Planning has already begun for non-violent direct actions that will focus on both the DMRE and Mantashe as the recalcitrant forces leading our country into an economic and ecological dead-end.

On the popular education front, the #UprootTheDMRE mobilisation stemmed from the coalition’s campaign for a Green New Eskom. Looking forward, as part of the campaign, we will continue to run popular education programmes across the country to grow the movement and show how the DMRE remains the biggest obstacle to transforming Eskom and our broader energy and mining sector.

In all of these activities and more, the coalition welcomes new member organisations and formations who want to work together and join hands in the struggle to uproot the harmful MEC, and build a more socially, economically, and ecologically just future in its place.

Work of a generation

In the end, the MEC is deeply rooted in South Africa. Uprooting it is a central pillar of uprooting the toxic economic, social, and ecological legacies of apartheid. The deeply unequal wealth accumulated by the MEC is largely built through exploiting people, workers and the environment.

To undo the MEC’s deep economic and ecological inequality, tools like a wealth tax can help redistribute riches from wealthy and polluting corporations and individuals. It is vital, though, that such measures invest in a truly just and transformative transition which redistributes not only wealth but also ownership, public goods, and community and ecological well-being.

The #UprootTheDMRE mobilisation was in the end just a moment in the broader struggle against the MEC and, in particular, the government departments and officials who choose to defend and deepen it, rather than overturn it. To truly uproot that deeply unjust system is the work of a generation, as we undo the extractive and harmful legacies of apartheid.

Alex Lenferna is secretary of the Climate Justice Coalition and a climate justice campaigner with 350Africa.org. He holds a PhD focused on climate and energy justice from the University of Washington.